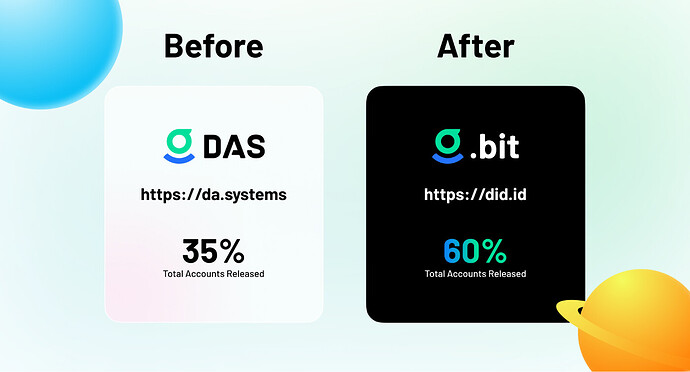 226 days have passed since July 22th, 2021 when the first .bit account was registered. During these days, DAS has grown faster than we expected. More than 40 DApps have integrated with DAS; the number of registered .bit accounts has exceeded 60,000.

During these days, we never stop thinking about what kind of product we want DAS to be. And we think it’s necessary to share our thoughts with the community. So here we are, telling you guys exactly what DAS is by rebranding it as .bit.

.bit in our eyes

We want to emphasize some concepts about .bit:

.bit is a three-character suffix, which looks like .com/.net. Some people often refer to it as “.bit domain” or “the decentralized domain .bit”. But we need to clarify that it’s NOT an internet domain. It’s NOT our intention to improve the mature domain system we already have, though users can visit centralized websites deployed on IPFS through .bit.

2 .bit is a DID (Decentralized Identity).

DID is one of the key infrastructures of Web3.0. It’s essential for any identity system to have a set of globally-unique and human-readable identifiers. Think of the phone numbers, email addresses and Facebook accounts we have. But they are all centralized identity systems. .bit, a set of smart contracts on blockchains, however, is a decentralized system. On top of providing globally-unique and human-readable identifiers, .bit system allows anyone to register .bit accounts as their Web3.0 identities without a number limitation. The registration can be done WITHOUT permission, and the accounts can NOT be deleted by any third party. So we call .bit a DID (Decentralized Identity) system.

3 .bit is a self-sovereign data container.

You can think of your identities / accounts as data containers. Your Twitter account is your identity in this app, in which all of your data in Twitter is stored. In Web2.0, you have different accounts in different apps, which means your data is distributed. And the service providers can delete or temper your data at any time. You do NOT own your data.

.bit accounts are also data containers, where you can store any type of data. What makes it special is that apps can only read data from it. The only one who can manage the data inside is you yourself. To put it technically, .bit accounts is a Key-Value database. Any application has read access to it, but only the user has write access to it. So we call .bit a self-sovereign data container.

4 .bit serves the entire Web3.0 ecosystems rather than one specific public chain.

We have kept this key opinion the whole time that Web3.0 is much more than just blockchains, and the blockchain doesn’t just mean one specific public chain or EVM-compatible chains. The leading technical architecture of .bit system allows users to manage their accounts with any public chain private key (technically any asymmetric encryption private key). In other words, .bit is able to serve the entire Web3.0 ecosystems rather than one specific public chain. This is the key feature that distinguishes .bit from other naming systems such as ENS or Unstoppable Domains.

The core of .bit is a set of smart contracts. But the actual .bit is a community consisting of so many roles such as .bit team, registrars, marketplaces, data providers, app developers, end-users, etc. Today, this community has already taken shape and is constantly expanding.

It’s .bit community’s shared vision to help everyone take back their data sovereignty by providing them with their own DIDs. We hope the brand new official website and brand image will convey such vision.

What we have achieved so far :

New functions and features that will be launched in 2022 :

In consideration of fairness, only 35% of .bit accounts are randomly registrable for now. As .bit integrating with more DApps and .bit’s brand visibility enhancing, we think it’s time to release more accounts. With our brand upgrading, we hereby reveal the plan for accounts releasing.

Parameters for each release:

Code and parameters for releasing :

The rest 40% will be released gradually according to the number of owner addresses in the future.

The rapid growth of .bit is the result of a joint effort by members of the community, and some of the contributors who we have never met deserve to be thanked here.

There are many users and app developers who also contribute to the .bit community. Our sincere thanks also go to them, but unfortunately there are too many to be listed here individually.

Let’s join hands in building the infrastructure of Web3.0. Let’s join hands for a shared future where everyone in the world has their own decentralized identity and their data sovereignty back.